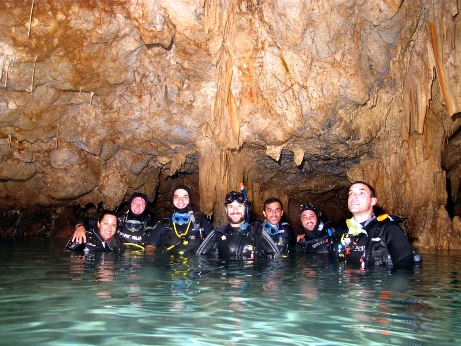 Elephant cave is located at Drapano cape, on the outer side of Souda Bay. It’s a true monument of nature!

It was discovered not long ago (around 2000) from a local diver, but it was not charted up until after 2003. It’s estimated that the age of the cave is more than 150 thousand years. During the previous geological eras, the cave shifted from the land to the sea, where it gradually got flooded, up to the point that the sea covered the whole area.

The entrance of the cave starts at 9 meters under the sea and the total length of the cave is approximately 165 meters, leading straight into the mountain. After the first 40 meters, the water gives its place to some air. The height of the roof of the cave from the water level can reach a peak of 14 meters.

In the cave, there were discovered several mammal fossils (especially deers). Along the fossils, there were some of the remains of an elephant, which led the people to give the name “Elephant” to the cave. Some of the fossils are still in the cave, which makes the experience even more interesting!

The entrance of the cave is covered from a wealth of sea life and inside that, you can find lots of stalactites and stalagmites. Diving around and also inside the Elephant Cave is truly a unique and breathtaking experience!